It's the first time I try to brag about an ultra. I don't even know to do it, I am a little nervous. I would love to write that this experience made me a better man, that I see the world differently, that my life changed, as I heard it often happens.


Well...not, just small variations,I'll talk about them below. Maybe it happens for the 100K.

Dean Karnazes, the mutant, said once: "If you want to run, run a mile. If you want to experience a new life, run a marathon. If you want to talk  to God, run an ultra".
I found here about three reasons for my personal failure of the last part. Or this is not applicable to mini-ultras, or he means road races, or you really need to run the entire course not only to be in a hurry.

Leaving the mystical subject aside, allow me to point out the good organization of this race, one of the best organized races in Romania

Because I am not a hater - we all know that -, I have only a question and two recommendations.
Why on a race organized in Romania, I suppose, at the kit pick-up, to talk in english with a french? She told me to show the jacked, I showed her the cup. She told me to show the gloves I showed her the cap. Finally, I realized where she was from and I tried to show off with my french, but it was too late and I was validated anyway.
I recommend a better glue. The chip came off, a lot of people lost it. I detached mine before it came completely off and I put it in a safe place. At the finish, even I looked for it desperately, I couldn't find it. I declared it lost and I was manually registered. I explained myself that the reason for this was a poor oxygenation of my brain and I felt more relaxed. I am sure the time recording was very accurate, even it was manually done. That means the time travel is finally possible, even for 15 seconds, in the past, as a conclusion from a picture right after the finish.
I recommend a better logistics so everyone can order the tee shirt. I understood they are very good.

The foreign language thing and the fact that only a litter over one third of the contestants was from Romania, had long time effects. When I was on the way down from Omu peak and discussing for a while with another contestant about snowfalls and running shoes, I had the genius idea to ask: "Where are you from". We continue then the discussion, fluently, in romanian. The man was wearing, as he declared, a pair of shoes - technical price - from Decathlon. He was very pleased with this pair that replaced his old 110EUR pair. He also confessed that his longest trail  so far was 11Km in Oltenia. That said, he took off on the descend and I never saw him in my life again.


The Leaville Trail 100 creator, Ken Chlouber said: "Became friend with the pain and you will be never alone". I said to myself: this is deep, I'll wait the darkest our, towards the end of the race, on the creepy Bucegi trails and I'll became friend with the grueling pain. What surprised me was the presence of pain right after the start, I even didn't get out of the castle yard. Oh men, what a shitty ultra I want to do if I even can't get out ok from the yard? Anyway, that pain passed, others came along, it was rather painful overall and no, I became no friend with the pain, even when it was at the max. As I said, for some an ultra changes their life. Me, in that period, made me to swear very much. This Kane I believe he is an asshole. I prefer to be alone all the race and pain free, I don't need such friends, thank you very much for the suggestion. 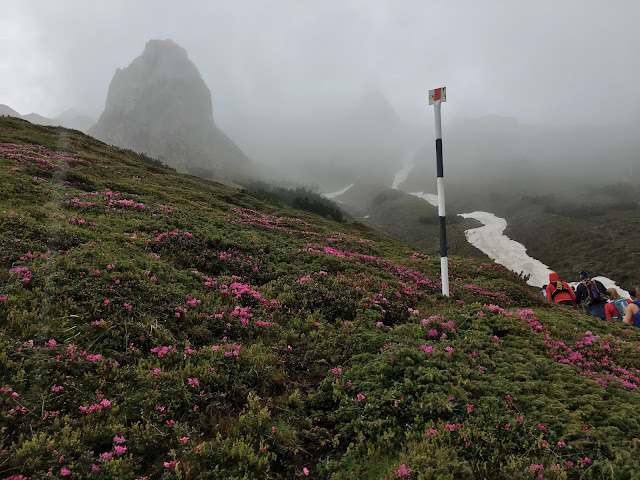 A contestant with whom I talked for a while, on the last part of the first ascent, said wisely: "You need to run a half-marathon, to drink a marathon and to eat an ultra-marathon". And another thing about a threshold above what you need to do something, but I didn't pay to much attention and I have the feeling I missed something important. I also learned that the thing is to have always something in your mouth, hungry or not. As I said, for some an ultra changes their life. Me, in that period, made me very polite. So i didn't argue. I said to myself though that is more sure to stick to my nutrition plan and I like to believe it was a good plan. As proof, I had a pretty constant and ok energy level all along the race. The man with the eating ultra, threw at some point that he makes the ultra races just to finished them in the cut off time. That panic me somehow so I moved forward. 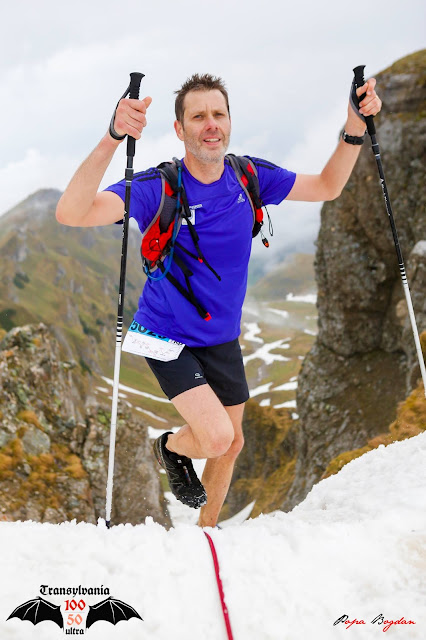 About weather, two crucial points for me: it wasn't sunny and it wasn't windy. Otherwise, we've got, chronologically: light rain, snow, heavy rain, light rain, hazel, rain.  In the last three hours it rained continuously. I say, like the 50k winner: this kind of weather is in my advantage. For him to win, for me not to collapse. I used only two equipment pieces: the jacket and the cap. The glows would be useful too, near Omu peak, but my laisyness was big and I payed with 15 minute of hands numbness for it. Interesting enough, the lady from the kit pickup wanted to see only the jacket and the gloves. Well, it seems like she new what she was doing.

Obviously, the vampires have a special place in Dracula country. Two competitors did their homework and each carried a garlic rope on the back. I don't know if the fake garlic has the same effect on vampires. What I know is that towards the end, when I caught up with the garlic & crucifix man, who lyied in a pool of mud and was very lazy to get up, I asked him: how was the keeping away the vampires going? He told me that we are safe on this matter. As I said, for some an ultra changes their life. Me, in that period, made me very insensitive. So I let him resume his rest in the mud and I went to finish my 50k in a little over 10h30m.

Last tens of meters in the woods. I see a military that works something on a gate. I thought he is put there to let the contestants through the army yard. Eventually to throw a cheer or two, why not? I even tried a joke, thanked him for caring for us. I found a little strange his reaction, a mix of boring and irritation. The track, signaled very good, was turning hard right, just before touching the gate. I found later that some mistaken and enter in the army yard where they were arrested and interrogated. So, you have only minutes to the finish line and you find yourself suddenly detained for a couple of hours. I still hope it is just a rumor, even it semmed like fun. Although, if I'm thinking well, that soldier that I thought was there to welcome us, he had, in fact, another mission. To block the gate. This could be true. 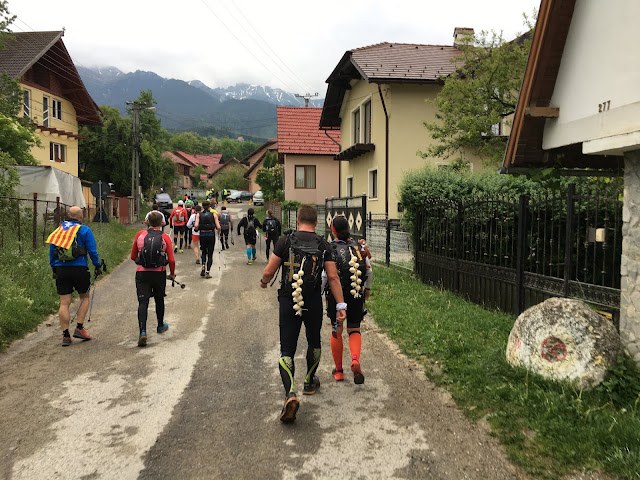 A piece of advice: if you want to participate to a long course you find it difficult, stay at the finish line at one of the editions. It is very interesting and even touching to observe the contestants at the end. It can show a lot about what you might expect. More of that, some cheers and congratulations are welcome anytime, especially when the spectator support is minimal. I studied pretty carefully the 100k runners after the comfort of a good night sleep.In fact, this was one of my strongest points in the mental set-up for this race. The thought I will soon be asleep while other nuts will continue to run all night in the mountains, gave me wings. The common feeling of the finishers seemed to be something I never experienced, something kind of extraordinary, something I want to experience, at least one time. 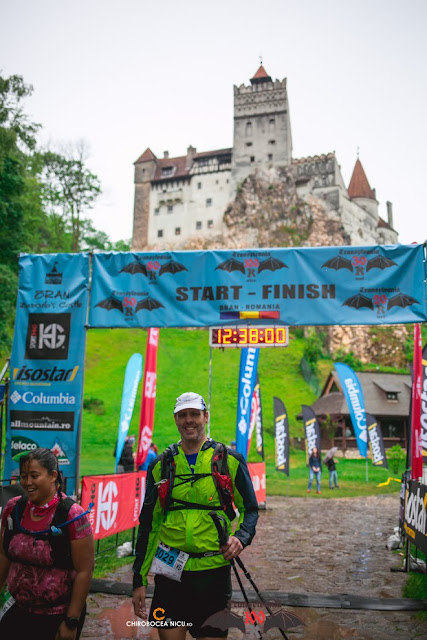 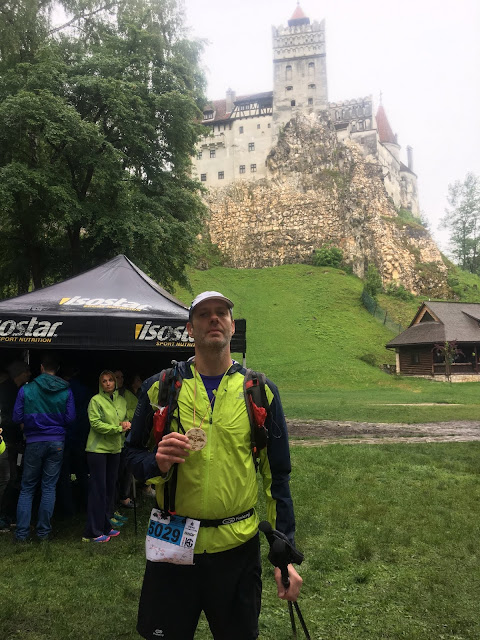